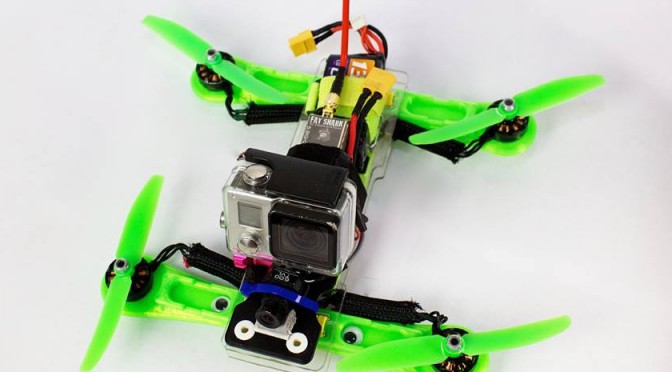 The Zippy is a DIY frame to be equipped with 250 size quadcopter gear of your own choice. The frame parts are all 3D printed from sturdy polycarbonate and ABS. Arms and center plates contain small holes so that they can be easily assembled with zip ties. Telling from the sample video, the frame seems to be rigid despite the modular design showing almost no visual vibrations and good flight characteristics.

The arms are available in various colors which can be combined for very individual quad designs. Nobody will ever have to ask who’s quad just won the race. The biggest advantage of the Zippy however is its repair friendliness. It uses zip ties instead of screws to hold simple plastic parts together. Hence, exchanging a broken arm is as simple as zip tying a new one to the quad. By using 3D printing alone, it should become easy to build replacement parts yourself. This completely takes away the fear of breaking your quad in race and waiting for the super special replacement parts to arrive from China in the mail. For me the Zipppy presents itself as an ani hero compared to other frames such as the a TBD Gemini. The Zippy is a simple and honest Kickstarter campaign with a simple product, offering a simple solution. If it will be able to deliver all of the promises, I don’t know. But all together, we can turn Benjamin’s summer into a very busy one. Go Zippy Go!

3 thoughts on “Zippy, the zip tied FPV racer on Kickstarter”